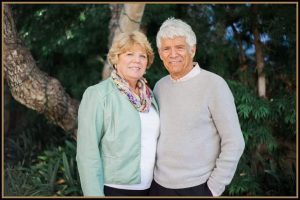 Angeline Hart had been approached so many times by women who were wondering if they were in a good relationship that she became a relationship coach, conducting workshops to help women achieve long-lasting relationships. Gorillas Make Great Lovers came out of her seminars, and the title refers to one of the twelve “manimal” types she’s classified men into. Angeline already has a website dedicated to her subject matter, one whose mission is, according to her, to “change the world one relationship at a time,” and her desire to write out her book led her, while she was searching for a possible publisher, to a writer’s conference where she sat down with several representatives from various publishing houses. She picked Angela’s Difference Press because she was impressed by the way Angela had handled herself while interviewing Caroline Greene, and even bought a copy of Angela’s book before she started. Angeline and her husband, Dixon Schwenk, then attended Angela’s three-day training program, after which she began writing out the book in earnest. 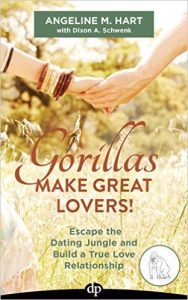 Dixon Schwenk is Angeline’s co-author. The method they developed was that Angeline would write during the morning, and they would then go over the material she had written in the afternoon, improving it so that it would be understandable. Angeline remarked that her creating an ideal client, which is a part of Angela’s process, helped her greatly with the way she wrote the book, as she now had a specific person in mind when she was writing the book, and given that she had the subject matter down she didn’t suffer from writer’s block for most of the time that she was writing the book. She did remark that she experienced doubts about her worthiness to write the book during the process, but was reassured by Angela that such were normal, and so worked her way through these. She also had some concerns when it came to how to wrap up the book, as she had not done such for her workshops, but she managed to do so by sharing some aspects of her life where the principles she described came into play.

After writing the book, Angeline focused on growing her business based on it, and she remarked that Angela’s assistance greatly helped her out, as she was able to focus on which offerings, from other people, would help her and which offerings she didn’t need. To those who are considering writing out their own books, Angeline remarks that everyone has a message that they need to send out to the world, and that people shouldn’t sit on the message they have, whatever it is.