In this episode of Angela’s Book Journeys Radio, author Michelle Mazur, also known as the Rebel Speaker (which is also what her podcast is called), is the guest for the week. Michelle is the author of Speak Up for Your Business, a book which is essentially about making the most of speaking engagements to promote one’s business. 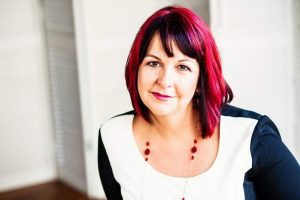 For Michelle, it was natural for her to pick this particular topic for her book since she has a doctorate in Communication and she’d always been passionate about public speaking. She recalled a time in her teen years when she got a chance to speak in class in front of a boy that she liked. Crushes come and go, but her love for public speaking was for a lifetime.

In her opinion, speaking is like an asset for a business wherein one can actually sell a business and what it has to offer. For Michelle, selling while speaking on a stage is a deviation from the traditional way of selling which involves cold calls and talking to hundreds of people at a time just to get one sale. In her opinion speaking is an alternative to selling directly. A speaker that goes up on stage had the power to connect with the audience and give them a great unforgettable experience that nurtures a relationship that lasts. She says that’s essentially what her book, Speak Up for Your Business, is about.

Through her speaking engagements and her book, Michelle hopes to effect change and create possibilities for the lives of her listeners. She had Before she even wrote the book, she already had a clear vision of what she would do with the art of speech and her book eventually became part of her mission of helping people creat opportunities in their lives. Michelle’s own story of the journey she went through in writing became an example for the whole point of the book. It’s because when she was still working on the book, she kept a full time job which allowed her to meet her financial obligations while keeping a schedule to “sit on her butt” to work on the book until she got it done. That discipline became the catalyst of change that took her from a secure but mundane life to one that was a reflection of her ideals. All through that time, she held on to one thought that kept her gong: “If I don’t make the leap now, I’m never gonna do it.”

Angela went on to ask that if someone were to follow Michelle’s footsteps and make a similar leap into public speaking in order to grow a business or sell a book, Michelle’s answer was clear. Apart from organizing one’s life to be able to work on a book, it’s also important to know how to market and to have a strategy. She confessed that she had it easy since she already had a background in marketing, but she also said it was important to get help from other people who can give a little push just like what Angela did as her writing and publishing coach. But, she added that on top of all the work that needs to be done, what’s essential is knowledge on where an envisioned book would fit in the overall scheme of things. She emphasized the need to define who is being served and for what. She said that effort would be pointless if these things weren’t identified, first.

Michelle also revealed a secret that would benefit all those who ever wanted to write a book (or succeed in business). Her advice was to not over-complicate things. As a fan of simplicity, she admitted that even in the writing process, she’d prefer that the auto-editing tools on her word processor be turned off because they are a distraction and only complicates the process of writing. Her advice: Just sit down, get the brain out of the way and just write until that first draft is done. 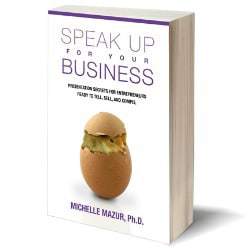 Michelle’s book has been a realization and she told Angela about the benefits that it has given her such as more speaking gigs and recognition as the go-to person when it’s about speaking up for one’s business. She said she had the process and methodology all laid down and not just anyone can take it and teach it to others. She takes pride in the experience of meeting people who quotes her from her book even when she doesn’t remember all the lines she wrote, which makes for some embarrassing moments. But it’s all good to her because she knows that being in business is all about connecting to people even if one gets into not so glamorous situations that a traveling speaker like herself often has to endure. “Just go and meet people,” she advised.

Listen to the Michelle Mazur interview on BlogTalkRadio