In this post, we review Dr. Angela Lauria’s Book Journeys interview with Maura Sweeney, author of The Art of Happiness.

Maura Sweeney had been “groomed” to be an attorney in New Jersey, but at the age of twenty-three, while still attending law school, she realized that she was unhappy, being in debt to get into a career she didn’t want in a state that she didn’t want to live in, in a time when getting a law degree meant working as a lawyer, and this realization was, perhaps, the seed from which grew the book that she would eventually write.  In the ensuing years, she had a career in telecommunications and management, through the business that she and her husband set up, as well as raised her children. At some point, Maura began writing blogs, and it was from these that her book was created. 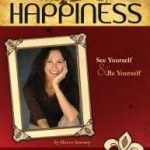 Maura initially started out writing an entire book with around twenty-five chapters, each one concerned with one aspect of life, such as early childhood memories, personal value systems and the like. She kept on writing and rewriting sections of the book over and over again, so much so that her husband commented that the book would never get out for so long as she kept on changing things, so Maura redid the entire concept, breaking the book down into smaller pieces. This proved to be a fortunate decision, as this enabled her to create the book, or, more accurately, the series of e-books that she presently sells on Amazon, with each e-book focusing on a particular aspect of life. Maura commented that the gradual release of the book enabled her readers to get to know what she was all about, including her thought process and sense of humor, as well as to develop an appetite for what she had to say. Maura’s book is actually a series of e-books, with no hard copy version available, and Maura noted that her books being developed in this manner is preparing her for the day when she would release a printed version of between two hundred thirty to two hundred fifty pages.

Branding is very important where Maura is concerned for such enables her to stand out from the pack of writers who have self-improvement books out in the market; as she mentioned, authors need to “define, refine and chisel out their message” to differentiate themselves from everybody else. To this end, Maura has included such personal touches as her own picture frame artwork on her books, which also fulfills her artistic drives. She is also highly passionate about what she does, and she notes that being passionate about one’s book is something that all authors need to be, as they will be the driving force behind the success of their work. Maura also recommends that authors join a writers’ group and get proficient in the digital space.

Listen to the Maura Sweeney Interview on Book Journeys Radio