On this episode of Book Journeys, Angela interviews Colleen Troy, author of Now or Never for Scaredy-Cats: Stop Hiding, Break Some Rules and Have Way More Fun Before It’s Too Late. 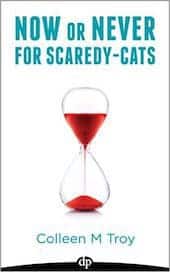 Colleen Troy admits to having lived a life where she was afraid to express herself until she reached middle age and suffered the loss of her father and younger brother to cancer. It was during this time that she decided to no longer live by that fear, and this found concrete expression when she and her husband went traveling by trailer for six months, taking a break after they sold their business. For Colleen, doing so broke the rule she followed of working until she reached the age of retirement, as she had been raised with a “nose to the grindstone” attitude, and she had fun when she gave up doing “to-do” lists and began living life without that structure. 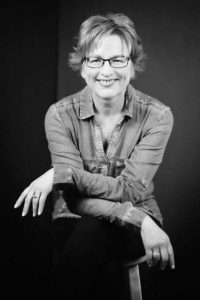 Colleen faced some challenges when she started writing the book, as it was during that time that she would become involved in helping her husband out with her business, which would require her to travel. The biggest challenge, according to her, was letting go of the doubt that anyone would want to read what she said or wrote down, and she admits that the image she had in her mind, of a writer being someone who drinks, smokes and sits by a computer twelve hours a day, wasn’t the reality for her. Colleen admits that there were times when she was struggling to figure out what to say next, and in those times she just shut down the computer, got out and walked, and it was while she was walking that she would get insights and inspiration on what to say next.

Colleen enjoyed working with Angela, mentioning that, thanks to Angela’s program, she didn’t have to worry about such things as finding an editor and a publisher, and notes that she was helped greatly, thanks to Angela’s process suggesting that authors write forward. Colleen had wanted to write a book for literally all her life, and writing out Now or Never helped her in the process of throwing off her fear. She now finds it easy to tell others, “I wrote my first book,” and has started a podcast called “Bloom, Baby, Bloom: Straight Talk from Now or Never Kind of Women Over Fifty,”, where she interviews women over the age of fifty, on her website, colleentroy.com.

Colleen remarks that all scaredy-cats would do well to end the suffering they experience from now expressing themselves, whatever age they might be, and release their self-expression out into the world so they can make the difference that they want to make, with the subsequent experience being a thrilling and fascinating one.

Listen to the Colleen Troy Interview on Book Journeys Radio

← Jim Shields: Basking In The Glow Of Recognition Is No JokeTHE ENTREPRENEUR’S PARADOX: When You Are Too Successful to Quit, But Not Successful Enough to Keep Going →
Comments