On this episode of Book Journeys, Angela interviews Lisa Danylchuk, author of Embodied Healing: Using Yoga to Recover from Trauma and Extreme Stress. 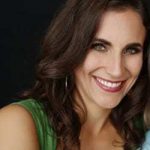 Lisa is a yoga teacher and teacher-trainer as well as a psychotherapist, and her years of practicing both fields, side by side, has given her a unique perspective on trauma and how to help her clients deal with it, particularly if they get stuck in therapy for their particular traumas. Lisa comments that, twenty years ago, such a synergy would have been looked at in askance by the established medical profession, but that there is now a growing realization that standard methods of psychotherapy are missing something, with two of these aspects being the role of the body in healing and with the lack of attention given to dissociation, wherein someone who remembers the trauma “spaces out,” using avoidance to deal with the trauma, rather than actually healing it. 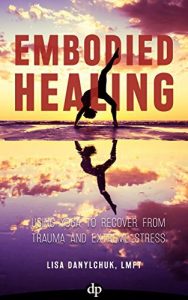 Lisa noted that people who experience a traumatic event react so physically and biochemically strongly and instinctively to it that they become overwhelmed, and whenever the memories come up they relive the event, rather than just merely remember it, which sometimes makes talk therapy and prolonged exposure therapy inadequate. In this respect, the kind of work done with one’s body that is emphasized in yoga can aid the trauma sufferer and aid the healing process itself.

During the interview, Angela remarked how Lisa’s book could come in handy, as she had recently had a client who was unable to continue writing his or her book because of being affected by some past trauma. Angela pointed out that her existing skills set was totally inadequate to get her client to continue writing.

Lisa wrote the book for those who are doing yoga and involved with mental health work. She had been wanting to write a book for two years, by her measure, and her biggest challenge when writing the book was not the information she needed to present – she already had accumulated that over the years – but her perfectionist nature. Lisa admits that she is still learning about the influence of the physical body on the healing of traumas and that the field she is in is still a young one, and despite all that she has learned she was somewhat reluctant to write a book out because she knew that she would most likely know more about the subject as time went by.

With regards to feedback, Lisa remarked that she had received a lot of positive feedback from those who had read her book and who had gone through her online course, and mentioned that her book had even reached India, with someone who was working with children. She also remarked that another book is likely in the future, with part of it dealing with some of the issues she only touched on in Embodied Healing.

Lisa has an online course on her website, howwecanheal.com for those who want to delve deeper into the subject.

Listen to the Lisa Danylchuk Interview on Book Journeys Radio

← Our first ever scholarship – #blacklivesmatterWhy was a famous stranger in my house? →
Comments