The featured author on this week’s Book Journeys is Dawn Shaw, who wrote Facing Up to It: A Triumphant Memoir.

Angela Lauria’s guest in this episode of Book Journeys Radio is Dawn Shaw, someone who’s had a teratoma (a type of tumor) removed from one side of her face which left her with damaged nerves and a facial difference which affected her life. Her book includes her parents’ story when she was born, her subsequent surgeries, the way people have treated her, and the things that she did to cope with her situation.

Someone had actually suggested that Dawn write about her life and it was a task that she took on hoping that she could help others with experiences similar to her own, helping them live a life that’s normal in spite of their being different. The book is her way of sharing her decision to not let her appearance get in the way of living an interesting life.

Angela commented that though Dawn’s story is a very specific one it actually is universal in that people have their own “differences.” For Dawn, the decision to write the book was timely in that she had a friend who was also in the process of writing a book who helped motivate her and start the “book journey” process. The writing part was easy for Dawn although it did take her seven years to complete and ended up with a manuscript that had five hundred pages. An editor helped her trim down everything to the most relevant parts.

Since it was essentially her life that she was writing about, Angela asked her if there were any issues regarding the content which involved her family and Dawn admitted that while there were some disagreements as to how some things really went down or transpired, but her family was actually very supportive of the book.

She was a perfectionist and would make constant revisions, though she needed breaks and would go for months on end without writing. In her mind she just knew that she would finish the book. It not only helped her at a personal level but she also saw it as an opportunity to help other people realize that one does not have to look normal to be normal. 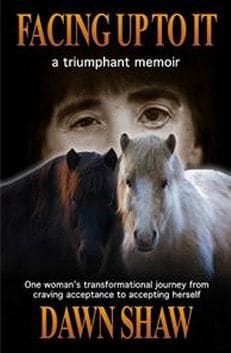 For Dawn, her book didn’t have anything negative but she has learned to accept that what she’s written down will always be interpreted differently. Sometimes, she’s surprised at what comes back, which is not really negative, but just different from her expectations. She accepts everything knowing that what she wrote is from her point of view and people don’t necessarily have to agree with what she’s saying.

Dawn’s advice to people who want to write about their unique experiences in a book is to just do it and to do it the best way they can. In her opinion, it’s better to have a book that’s not self-published to avoid the stigma associated with that route. Nevertheless, they do not have to make it public if they don’t want to. She says what’s important is getting it emotionally out. But if they do decide to publish, her advice is to get a good editor.

Listen to the Dawn Shaw  interview on BlogTalkRadio