In this post, we review Dr. Angela Lauria’s Book Journeys interview with author Mark J. Silverman, author of Only 10s: Using Distraction to Get the Right Things Done.

Mark Silverman is a professional coach and consultant who also has ADD, which he managed with the aid of Ritalin. He experienced the usual multiple demands on his time attendant to his business, handling which was made particularly challenging, given his condition, and he soon noticed that instead of managing his time, he managed his energy instead and did the things that he gave energy and attention to – with the things he really gives energy to being the “10” in his book title – the things he needed to do got done a lot faster compared to when he worked to manage his time.

Mark notes that people usually do the things they do out of fear, a sense of obligation to others who might have a different agenda or because they “should” do it, things which, Mark claims, leads to a “victim” type of mindset, wherein one feels harassed. Mark notes that a change in mindset, such as in his example of a child coming down with an illness on a workday and of the parent changing his mindset from that of feeling harassed to dealing with the problem from the context of being a good parent, is necessary so that people will focus on the things that would be more applicable to them, rather than on things that merely waste their effort. Shifting mindsets is confronting, Mark acknowledges, and he points out that the true reasons that people do things, such as wanting to have a paycheck and work-related benefits, aren’t the reasons they tell themselves why they do things, such as going to work. 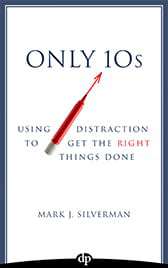 Mark notes that experimentation is important where a person figuring where his energy flows to is important, and gives the example of learning how to sing and play the guitar for a speaking engagement on risk and vulnerability. He was at first skeptical about the idea, but his performance became a case study related to the topic and proved to be a kicker to boosting his business.

Mark noted that he began writing his book shortly after he said “yes” to himself, that he would write this book, and doing so was a challenge for him. He didn’t write his book out linearly, but in chunks, and then put these chunks together into a coherent book the way he would put together a puzzle. Completing the book has given him the confidence that he can actually complete a project and remarked that writing out the book gave him a Ph.D in a process that was different from the usual time management processes out in the market today.