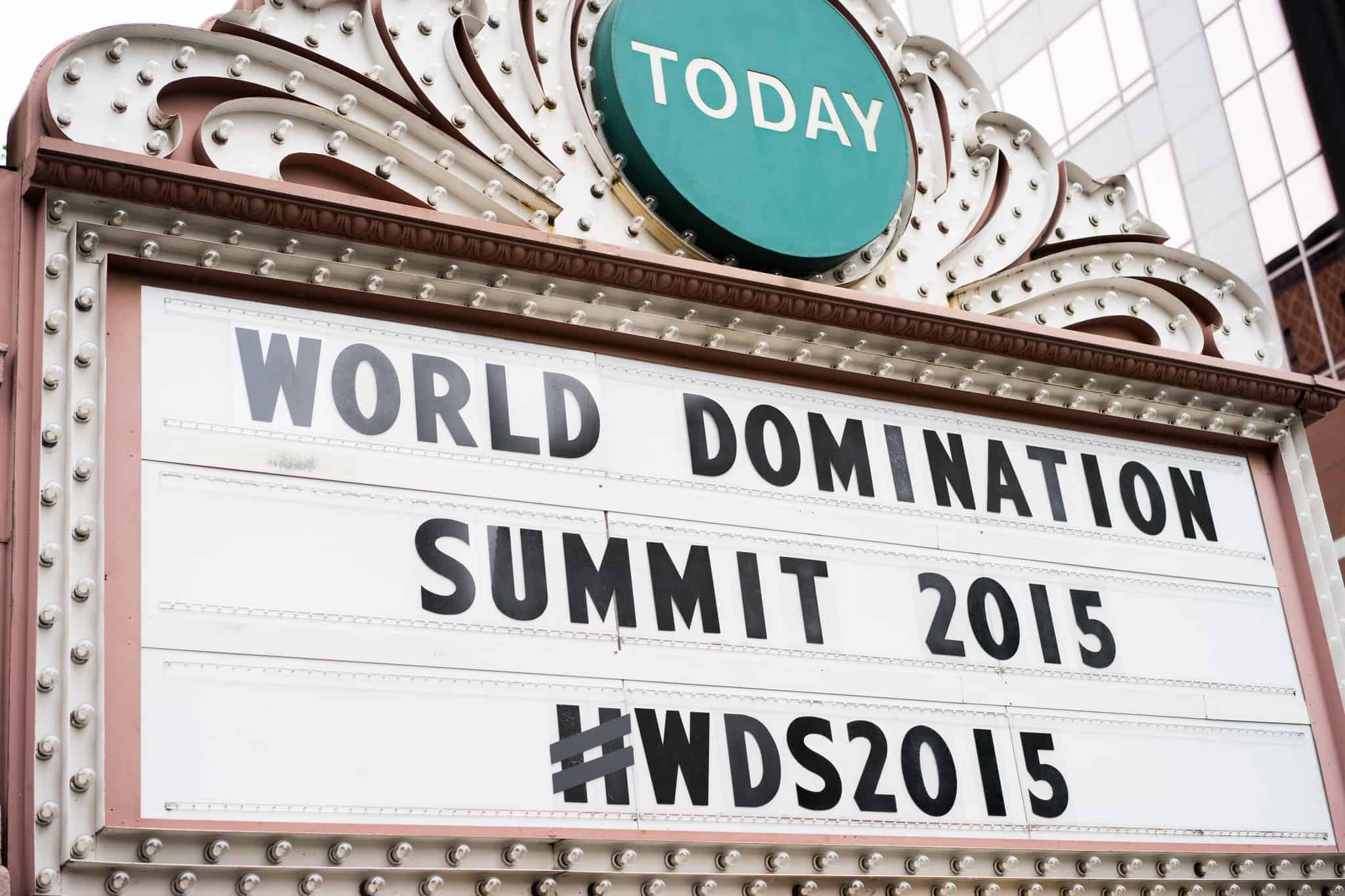 WORLD DOMINATION SUMMIT (WDS) is an amazing event that I’ve been privileged to attend for the last 3 years. Blogger & Art of Nonconformity author Chris Guillebeau brings together 3,000 readers and fans for a 3-day conference that grosses well over 7 figures. I would love it if all my authors could launch million dollar events to go with their book.

But today, I’m breaking up with WDS.

I’m constructively angry with what was taught at WDS and I’m feeling that events like this make the world a LESS good place. I know my fellow WDSers aren’t going to like to hear this, but here is my catalog of problems with WDS:

1) – YOU AREN’T AWESOME JUST BECAUSE YOU ATTEND. IF YOU AREN’T TAKING ACTION – YOU ARE CHEATING YOURSELF AND THE WORLD AND THAT’S NOT OKAY WITH ME. –

The incredibly heart-centered WDS attendees WANT to make a major difference in the world – that’s why I love coming here, these are my people! – but I fear this conference contributes to keeping them SMALL by making them feel like COMING alone is making a difference.

The speakers bend over backwards to talk about how incredible the audience is, but then the topics they discuss are very entry level pieces of advice for people who want to do big things but haven’t. When I meet people — they have ideas or are looking for ideas but very few are taking action to change the world.

Just by coming to the event I can see how you would get relief that you HAVE to be doing something amazing just to be in the room. But the truth is, you just have to buy a ticket and have a dream. The conference itself isn’t what’s going to make that dream a reality, you are. And here’s why I think the conference is DANGEROUS – because everyone on stage is saying “go follow your bliss” but I think most of the audience gets satisfied and juiced more by dreaming about SOME DAY in the future when they are going to have enough information to take action.

I know this is controversial, but I think the ‘feel good’ endorphins of WDS have stopped people from the DISCOMFORT that leads to action.

One of the big themes of WDS is about finding and perfectly your craft. Make something spectacular and people will buy it. SOMEDAY. But I think you should make something adequate and sell that TODAY and then iterate. I love that the last speaker this year, Derek Sivers from CD Baby did exactly that. Take something semi-half-ass or good enough, sell it, if it makes money (or as Derek puts it, if people are begging you to take their money) then make it better. If it doesn’t sell, launch the next idea.

I was thrilled Derek was on the line up (though I had another problem with him which we’ll get to in point 3) but most people at WDS need to read Eric Reis’ masterpiece, THE LEAN START UP. If you wait until you FIND your perfect “thing” and then WAIT AGAIN until that thing is PERFECT and then go to sell it — dear Lord is that selfish.

You are enough RIGHT NOW to launch SOMETHING.

Again I found myself feeling like the message of WDS is YOU ARE CHANGING THE WORLD JUST BY HAVING THE IDEA YOU WANT TO AND COMING HERE. These attendees are generally NOT changing anything, they are just thinking about it. The level of discomfort with doing an adequate job and launching before you are ready makes me sad for all the people these attendees won’t help.

Finally, my biggest beef with this event is that I believe it’s perpetuating a belief that in order to make it you have to “hit it big” almost by winning the lottery. The idea seems to be that GOING for a business that generates actual money is a BAD way to change the world and the GOOD way is to perfect your craft until you have a miraculous viral hit.

The guy behind Kid President struggled for years and then he “won the lottery” by having a cute kid come into his life so he could use his skills and have a viral sensation.

Vani Hari (Food Babe) made her meteoric rise SOUND like she just stumbled into it, but from what I can see it was pretty strategic and well orchestrated. She didn’t talk about that part. When you start accusing major food manufacturers of butting beaver buttholes in their ice cream, you can’t be surprised when you get backlash. But her whole presentation made it seem like she just got lucky.

Megan Devine “won the lottery” when he husband died and she turned her grief into a movement. I know that’s a terrible way to put it, her story was powerful and I’m not saying she is leveraging his death for fame or money, but let’s be honest it is what got her on the stage. Do you need to have a tragic death in your life to make a difference?

Lewis Howes got to talk about shame and vulnerability (especially for men) but what he didn’t talk about was how he stumbled into a massively lucrative Internet Marketing business (which I know because I’ve followed his career since I heard him speak at another event in 2010) which gave him a PLATFORM upon which is message could make a difference. If anyone else (without a platform) publicly told their story of being molested at age 5, not a lot of lives would be changed. He COULD change lives because he made money first and had the audience and credibility to make a difference!

Derek Sivers talked about this on the last day but he was more transparent. He basically said he didn’t have a strategy or even a plan to make money and he just got lucky. He was trying to do 12 other crazy things and this one just took off. (Let’s be really clear he did a great job of constraining his focus once he was graced with his lottery win – and many of these speakers did as well… but it makes me sad that we are telling people who want to change the world that to do it you need to hang out until you win the lottery.) But as much as I enjoyed Derek as a speaker, it was another example of WDS endorsing the IF YOU BUILD IT THEY WILL COME school of life.

Chris started the event by saying it was sponsor and pitch free and everyone cheered. But had he taken sponsors how many more people could that revenue have helped. And had he made a pitch for a product or service to actually take action, how could that be anything but awesome?

I think this event invites people to be small by telling them they are remarkable. We are all remarkable – but the ones who make a difference come in 2 flavors: