Richard Branson Thinks You Should Write A Book 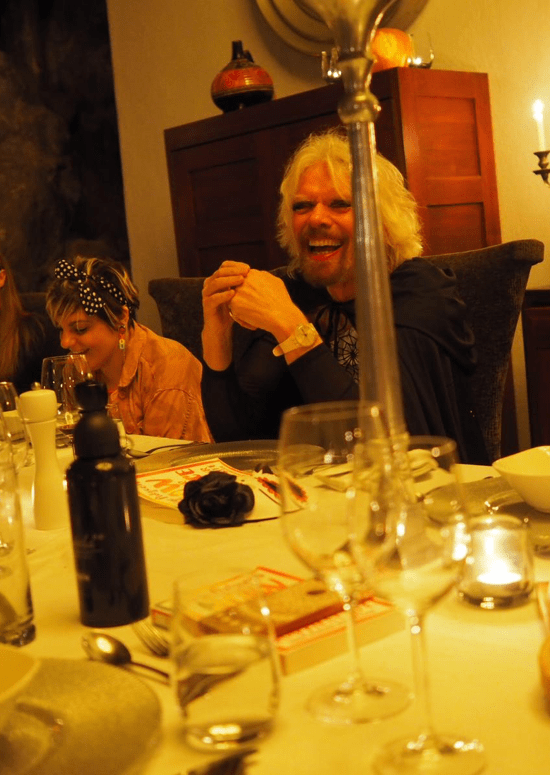 “You’ve got quite a big brain there,” he said as he tussled my hair and walked away.

The smoke from the campfire was blowing in my face and filling my lungs. I coughed and stared into the fire.

‘What the fuck did that mean?’

Here I am standing with one of my heroes and I am feeling like I blew the opportunity of a lifetime. I’ve been passionate about the work Richard Branson and his Virgin companies do because his approach is the one I have taken as my philosophy: To make a difference in the world, you have to fund your movement.

Richard proves his commitment to making a difference by funding the hell out of his movement. He has pledged to invest $3 billion toward addressing global warming, he used his influence to urged companies to boycott Uganda because of its “anti-homosexuality bill” and he was a founding sponsor of the International Centre for Missing & Exploited Children. There are so many ways he has brought hope, healing and transformation to the planet, which is, of course, why I admire him.

But now, I’d embarrassed myself in front of him! I’d spent all of 5 minutes chatting with Richard Branson. How or why was he making a flippant comment about my intelligence?

In our chat by the fire, we talked about his foreword for our mutual friend Naveen Jain’s book Moonshots and the marketing power I think Naveen has with his Moonrocks instead of Diamonds concept.

I asked him how the rebuild of Necker Island was going after the hurricane and how much of the energy for the island was self-sufficient. We talked about the new windmills and the solar panels and whether they could actually generate more power than they needed.

It wasn’t a particularly deep conversation but it was our first and I wanted to make some connection points and see if there was potential for a real relationship with the real person behind the Richard Branson fame.

And then he said that “You’ve got quite a big brain there… I look forward to talking more when I see you in May in Necker.”

My “big brain” started playing out stories – ‘Was that a compliment or an insult? Why a few hours in, was he already talking about our second planned meeting? Did he want to get rid of me? Was I annoying him? I’m annoying. I annoyed him.  Did I name drop inappropriately? Should I have not mentioned Naveen? What does he mean by big brain?’

I often say my biggest, hardest job responsibility, is keeping my feet in the dirt. To me what this means is staying grounded and present and not getting stuck in my stories or letting my brain go off on wild goose chases.

I coached myself into chilling the eff out and just enjoying the evening for what it was. But it was a constant practice of returning again and again to myself, my heart, and my truth and releasing my unsubstantiated stories of what Richard Branson thinks of me.

At dinner I ended up sitting next to Richard and about half way through the meal he asks the table “So has anyone here done their book with Angela?”

GAH! I panicked. I wanted him to see me but I was scared to be seen.

“Susan did!” I said, “She was one of my first 5 clients. She believed in me before anyone else did.”

Richard turned to Susan, “Was I right?” he asks “She has a huge brain, doesn’t she? I was just telling her this. I bet she was just terrific to work with.”

Susan said some nice things and we got to talk about her new book BARE which is coming out in the Spring. But my mind was exploding…

When Richard commented on my intelligence back at the camp fire, that’s literally all it was – his interpretation that I was smart. That’s it. No other story. In our 5 minute interaction, he’d made an assessment and then he checked it at dinner. I certainly didn’t walk him through my program or my numbers. I didn’t do something to get this assessment around my intelligence, I just was myself and that’s what came through. I was definitely not “trying” to be smart in that brief bit of small talk.

Look, having a big brain, that and $5 will get you a Latte, so I’m not sharing Richard’s comments to brag. I’m saying it because of what I learned from getting to coach myself through this experience.

I made Richard’s comment mean so many things — frankly, most of them negative. My brain is particularly adept at coming up with negative interpretations of situations. And all those thoughts and fears about what Richard Branson thought of me, could have made me spiral out of control and do or say something stupid.

I was proud of myself for choosing instead to keep breathing and stay present and curious. It’s so interesting how hard it is for me to stay grounded in my own truth, especially being around someone I admire and who the world sees as hugely successful.

I wanted to be “seen” by Richard Branson.

But I also dreaded being seen by him.

What if I didn’t like what he reflected back?

We do this all the time. We WANT to be seen but only if it’s in a POSITIVE LIGHT. But we are so scared it won’t be positive, we create the very negative experience we are afraid of. And sometimes we misinterpret something positive for something negative like I could have done in this case.

I say to my authors who are procrastinating about finishing their books: “How is hiding better than getting the book done?”

And here was the answer in front of me. If I didn’t go on this trip, I wouldn’t have spent time with Richard Branson. If I didn’t spend time with him I wouldn’t risk him seeing me. If he doesn’t see me then I won’t know what he thinks of me.

Hiding is our way of rejecting ourselves in advance so other people don’t get the opportunity.

The truth is, I can never know what Richard Branson thinks of me. I can only know what he says and does around me and then I get to make up stories about what he thinks of me. We can only see life through our interpretation of the circumstances around us.

It’s not my job to control what Richard Branson does or says or thinks. It’s my job to control what I do, say and think. Meeting him gave me an amazing opportunity to stay clear about my job and to strengthen my ability to do that. Instead of getting excited about him calling me smart or getting worried or stressed or stuck over it – because all those interpretations were available to me – I asked myself this: “How do you want to feel about your time with Richard this week?”

My answer: I want to feel like I am getting to know an actual human from the heart.

This is my entire “LOVE IS THE ONLY STRATEGY” approach to all things.

I am constantly asking myself:

We hide because we feel like it protects us from rejection. We reject ourselves to deprive others of the opportunity. But what if rejection wasn’t even an option? What if the only option we gave ourselves was love?

There is no upside to hiding.

I asked Richard, “Why do you keep writing books? You clearly aren’t doing it for the advance at this point.” And he said to me something I want you to think about from the perspective of LOVE.

That’s a direct quote from my ears to your heart. Richard Branson thinks you should write a book. To do it, you will have to learn how to manage your emotions around what people think about you. Writing a book does require being seen and resisting rejecting yourself in advance. It’s a heart-centered spiritual practice that I hope, your desire to make a difference, will guide you to choose.

If you are ready to make that choice now, head over to www.TheAuthorIncubator.com/apply

4 responses to “Richard Branson Thinks You Should Write A Book”