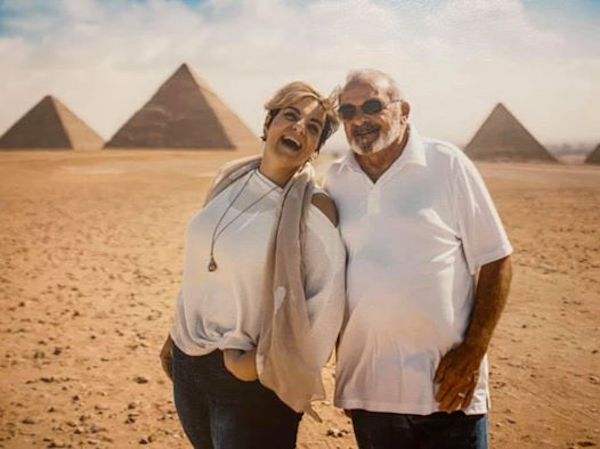 If you’ve finished watching The Weight Of Success then you’ll have seen that the making of the movie was the first time my Dad apologized to me for not being Mike Brady from the Brady Bunch when I was a kid….

In the 90s I actually spent years in therapy, I’ve been a student of a Course In Miracles for over two decades, and I’ve spent the last 13 years being coached and then becoming a life coach, then I helped over 800 coaches, healers, and consultants write over 1,000 books that helped them make a difference in the world and grow their businesses.

I thought the forgiveness work was done long ago, but the movie and what’s happened between me and my Dad since we wrapped has opened up a new dimension for us and for me that I’d previously not been able to get to.

What happened next is incredible….

I spent the first 25 year of my life casting my dad as the villain and me as the victim. The next 20, I accepted the fact that I didn’t have enough information to draw the conclusions I had been drawing and I recast my life with me as the hero and my dad as a well-meaning enigma divinely guided to empower me through trials and tribulations – which worked!

But with the opening of our relationship that happened in this movie, and with a lot of self-work and Divine Guidance, I received that it was time to go beyond the the years of healing that I’d been doing on my own and share a father-daughter moment that lasted a lot longer than an occasional awkward meal. We took a 16-day trip to some of the most sacred places in Egypt.

The trip was an amazing opener for us. I got the apologies I always wanted in my victim years and while I no longer needed them, an apology and a hug felt pretty good. For the last two weeks my dad said all the things I didn’t hear growing up – he loves me, I’m smart, I’m beautiful, he’s proud of me. All the things I had let go of ever needing to hear, I dropped my story that those words were required. Dropped the story for 20 years! And now I was hearing them from a place of total freedom.

I know I’m beautiful. I know I’m smart. I’m proud of me. I love me. I didn’t NEED my dad to say it to make it true! So when he said those things (and he said them every day for 2 weeks after 46 years of not getting those messages from him) it was from a place of total FREEDOM. My love and approval of him was not contingent on those words. Those wordswere not filling up empty holes in my heart. Instead they were adorning my already perfect and whole heart and it felt so wonderful. It wasn’t required, but it was appreciated.

As our hearts softened together, a new past emerged for both of us, together. One where we were both heroes. I can’t speak for him, but I felt the weight of the “I wasn’t a good dad” story he has been telling lighten for him as I gave him permission to let it go.

I watched miracles unfold for both of us back home where he and I were both freed to love our romantic partners more deeply without the burden of our stories of failure and limitation.

I really thought the forgiveness work I had done alone was sufficient. And it was. I mean it was better than staying cast in the role of victim. But in Jerusalem, as this trip was coming to a close, I could see how the limitations of the way I had forgiven my father caused me to sabotage my marriage.

I called my ex husband from Mamilla Mall, near the Jaffa Gate of the old city. I was just inside the Jordan border of the Green Line from the 1967 6 Day War. It was the middle of his work day but I had to talk. My speech was pressured.

“I figured out what I had been doing wrong our whole marriage. I figured out why I could never fully integrate your love. I see how my repeated rejection of your love caused a cascade of effects that eventually led to our breakup,” I spewed.

I told him how I could see my dad more clearly now. I had a better view. And I could see how my misinterpretation through the years had effected our marriage. I had been replaying the limitations of the depth of my forgiveness with my father with him. I hadn’t been willing to soften, to know him, to see him. I treated my husband as an unknowable but benevolent stranger. And that kept things pleasant but distant. I did the work alone. I hadn’t known letting him in was even possible.

I started this trip listening to Karen Lorre’s book Chronic Pleasure and I swear that book softened me so that I could seemore clearly. In looking back with softer eyes and my dad’s hand in mine, I saw new depths for forgiveness. And with a softened heart I was also able to look back and rewrite my marriage and now, instead of rewriting it alone, I am ready to rewrite it with my ex–husband. Well, if he is.

The words poured out of me and he seemed happy but a little overwhelmed. “What happened to you?” I could hear in his tone. “Egypt happened to me. Jordan happened to me. Jerusalem (East and West!) happened to me.” But mostly what happened to me was two weeks of actively being loved by and loving my dad and in that light I could look back on all the moments of fear that drove my marriage and see how they were never real. The stories crumbled like red clay rocks in the desert. Only love is real.
“Instead of pushing you away with love, I can see now, I could have pulled you closer with it. Would you give us a chance to try it this way? From these heights, I see a new path laid out before us that I didn’t see before.”

The answer is emerging. Watch this space. But, to quote Little Red Riding Hood from Into the Woods, “I know thingsnow, many valuable things that I hadn’t known before.”

“This trip will crack you open.”

It was the last thing Marianne Williamson said to me before I left. And it did. But in none of the ways I expected.

THIS EXPERIENCE RIGHT HERE is why I do what I do. In fact, it was the culmination of every piece of self-help work I’ve ever done. The breakthroughs I’ve made in myself as the result of Life Coaching and my other self-work have literally saved my life on numerous occasions. And the work I get to do with the 800 coaches, healers, consultants, and entrepreneurs have helped millions more people get through the life situations they couldn’t overcome on their own.

And what happened between me and my Father in Egypt has me more committed to helping as many authors I can get their messages out to the masses, and build transformational author businesses that truly serve humanity in the way that
I’ve been served.

Are you one of us? Are you a coach, healer, alternative medical professional, lightworker, or consultant or entrepreneurwho is looking to make a bigger difference in peoples’ lives? Do you already have a solution that you’re offering to people that you want to take to a bigger level? Do you want to add at least six-figures to your personal income while helping people in the way that only you are uniquely qualified to do?

Then join me in this masterclass and find out exactly how you can do it by becoming a Transformational Author.

← Announcing New Program For Spanish Speaking EntrepreneursPeople Call Us Pretenders…. →
Comments
You have successfully subscribed!
Your eBook will be emailed to you.