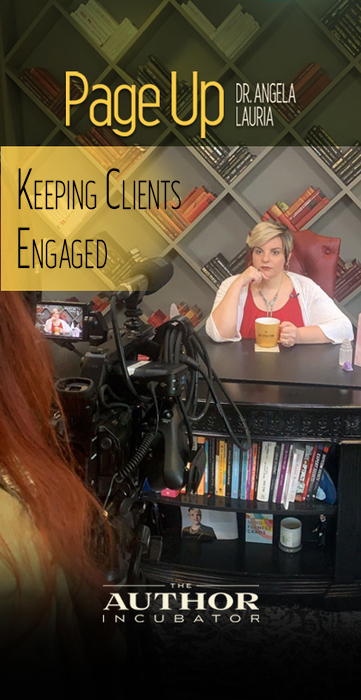 In this episode, Dr. Angela teaches how to build in support to keep your clients engaged and coming back for more. Like Oprah says, “your presence is your present.”

Listen To The Show:

Learn how to make $10k with your book at PageUpPodcast.com

In this episode you will learn: 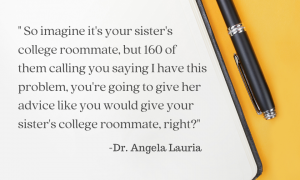 Awareness. She’s doing three things direct. She’s emailing, she’s doing Facebook ads, and she’s doing speaking. This was like speaking to moms groups, emailing old sorority friend, people from her sorority, xiety or whatever it’s called. And then running Facebook ads. Right? Now generally, this is very hard to calculate, but I want her to be reaching around 1600 call it impressions but reaching 1600 people, it’s going to be more than that with Facebook ads. So she’s probably going to get more than 1600 clicks on her Facebook ad. But, you know, let’s say she’s speaking once a month, and there’s 100 people that she’s speaking to at the moms group, there’s probably 20 people, so she’s probably gonna get at least 1600 Facebook clicks her email she sending out let’s say, 30 emails, she’s gonna send one email a day, right? She’s gonna have to get in front of about 16 hundred people.

Then she’s got to lead magnet. She’s got a book and she’s got a short class that people can register for. And from her direct email, she’s sending people to the class from her Facebook ads, or she’s sending people to the book from the Facebook ads. She’s sending people to the class. from speaking, she’s sending people to the book. She’s trying all different combinations, but there aren’t that many combinations so she can make sure the class is great. And it’s working. She’s got the thank you page. She’s got all those conversion emails with the book. Maybe everybody who gets the book she follows up and sends them the class. Maybe everybody who gets the class she follows up and sends them the book. So she is rockin these hundred and 60 leads so of the 1600 people who hear about her 160 people sign up for either the book or the class of those hundred and 60 people she is engaged, talking to them online. Some of its automated some of its real, these are the people who I say pretend they’re real people, and talk to them as if you love them and care about them. So imagine it’s your sister’s college roommate, but 160 of them calling you saying I have this problem, you’re going to give her advice like you would give your sister’s college roommate, right? Yeah, my sister said you have that going on. Let’s let’s hop on a phone. And let’s see if I can help you out with that. So pretend the real people love them and help them of the hundred and 60 people. She has conversations with 16 are going to end up on sales calls. Y’all call these different things, discovery sessions, sales calls, free consultations. I don’t care what you call it, I call it an interview. Doesn’t matter what you call it, it should fit your world. Right so like if you’re doing speeches, it’s probably called a sales call. right because they’re probably booking speakers, you know, so I’m going to talk to three speaker Booker’s if you’re doing something in the healing space You might sit strategy session might sound weird. So it might be like a discovery session or a healing consult or something like that. Okay, so think about what you’re going to call this and put it on your plan. I she’s calling it a sales conversation. So she’s gonna have 16 of those of those 16 sales calls. And by the way, we can map hours to each of these, right? We’re going to do that we’re going to say, how many hours are we spending on each of these things? You think that you spend as much time as possible and then calculate the hours but it’s just like your book. Remember, I told you each chapter should take between two and four hours is because you decide it’s going to take two to four hours. That’s the same thing as this. We’re going to decide in advance how long it’s going to take and there’s much more likely to take that long. Okay, she gets on the phone with 16 people. She listens to their problems. She loves them and cares about them.

She then offers some of them but not all of them will say 12 of them. She offers to help them with her solution. And she says, I know exactly how to get you a plan to start your mompreneur business usually takes me about eight weeks working with people. And of the 12 people, she makes an offer to four, say yes. Of the four people that say yes. So this is the number of clients, you want to include that she’s going to charge them $1,000 she want to include the price, you want to include the result in one sentence with no commas, hers is plan to start business. Yours is too complicated. Okay, so she’s a great, we’re gonna get you that plan in eight weeks. It’s eight weeks of one on one. You started right away. I have a training that’s based on my book. I’m going to send you my book. I’m going to send you the training. I want you to get started. We’ll have our first call next week. And we’ll talk about the first class and we’ll get your first part of the plan done. Part one. So it’s a combination of recorded and live calls. Everybody with me, people Sample right? Now she has to implement this plan.

So at week seven, she is going to say, Hey, listen, here’s the thing. I have helped lots of moms get their plans very often, once they have the plan, they get pregnant and decide to put it on hold, or they start grad school or their husband gets a new job, or they’re moving to Texas. And they say, well, as soon as things calm down, I’m going to implement my plan. And the truth is, with all the moms that I’ve worked with, if they wait, and they don’t go straight into implementation, other things take over. It just doesn’t happen. And so I realized that to really be of service to you, I had to also offer a way to keep you accountable, to keep you accountable. And also to be totally honest, a lot of the stuff we’ve talked about, like we’ve talked about boundaries and some of the stuff that’s going on with your mom, and how this is bringing up her stuff of putting her dreams on hold. That stuff’s not going to get easier because You have a plan, you are ready have had a couple of hard boundaries, conversations. And I think you’ve done an amazing job. But there is more to come. And I want to be there to support you through this process. And so I’ve created, what I found is to get your business up and running, to collect your first dollars to have the website live, to have your first clients and to be able to file taxes as a business owner, it takes a year, especially as a mom. And so I’ve developed a program to help you implement our plan that we’ve built together.

Now listen, you may feel comfortable implementing this on your own, and that’s fantastic. But if you don’t feel comfortable implementing that on your own, I’m going to run the call a lot differently next week next week will be the kickoff call to us working together for an entire year to make this a reality. But if you decide that you’re going to go do it on your own. Then next week, what I’m going to do is tie everything up. And I’m actually going to have you present to me how you’re going to put everything into action. I’m going to have you focus on what are the questions you have. So next week is about me wrapping everything up with a bow and making sure every question you have about how to get this implemented is answered. So I’m going to need to know before our next call, because how I run the call will obviously be different. I’m sure you can understand that. So we were able to work together for $1,000 for the last eight weeks. What I like to do with people is I like to for the year, offer them a year of support for 6000 but I want to acknowledge that you’ve already spent $1,000 with me, I want to credit that back to you. So instead of charging you 6000 if you can make that decision before our next call, I’ll be able to give you the thousand dollar credit now of course you can make the decision anytime you I just won’t be able to give you that thousand dollar credit. And we’ll just repeat these eight weeks. So if you want to move to Texas CALL ME in six months. Sounds fantastic. We’ll just start over, we’ll do these eight weeks for 1000. And then we’ll work together for a year. So you could just pay 6000 and it will be a year plus the eight weeks, no problem. But if you can make that decision before our call next week, I’ll just knock the thousand dollars off, I’ll contribute it towards your success, and the cost will be 5000. Now of for clients, you see how hard it is for me to get to $10,000 by the way of four clients, you are probably going to get two out of the 450 percent is standard. So that is 10 K, and that brings this funnel to 14 k worth of delicious fish. Okay, so that’s a $14,000 got it.

← How Caroline Generated $17,000 with Her Book in One Month s2e17Write the Right Book-Pick a Topic that Attracts Your Dream Clients s2e19 →
Comments