Angela’s guest on today’s episode of Book Journeys Radio is J. Michael Curtis. Michael, or Mike, is the author of Try It This Way: An Ordinary Guy’s Guide to Extraordinary Happiness. 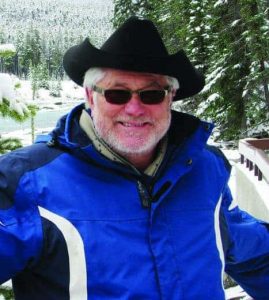 The interview with Curtis got off to a rather shaky start, as Angela had some technical issues prior to Curtis coming on. However, those got ironed out eventually, and the interview was able to proceed smoothly from that point onwards.

Curtis admitted that unlike most of the authors that have been featured previously on the show, he wasn’t an academic, so he approached the writing of his book from the everyman standpoint; that is, simply writing what he knows, what he has learned, and what he thinks about something, and keep it as simple and as practical as possible. He goes on to describe some of the contents of the book, such as practical tips on how to keep your car in shape, to camping and roughing it out in the outdoors, all the way to his thoughts on deeper, more philosophical topics like mastering your inner world.

The idea for Try It This Way, Curtis revealed, came by way of his daughter-in-law, who noticed that Curtis had lots of opinions on several topics, so she suggested that she write a book. He said that writing a book wasn’t really that he had thought of before his daughter-in-law pitched the idea to him. Once she did, however, the ball got rolling and he immediately started working on the book.

Curtis didn’t find the process of writing the book itself difficult, as he was used to writing a lot during his professional life. However,  he did take a year to write the book, from 2012 to 2013. Writing at his own pace and doing a few pages every day, he used the time to fine-tune and polish the ideas that are included in the book. His creative routine involved formulating concepts while walking his dog, and compiling the ideas when he got home. In the evenings, Curtis would check what he had written previously, and tweak it as needed. While he did have days when he had nothing to say, he used the time working on other ideas that he was considering for the book.

Curtis self-published Try It This Way through AuthorHouse. He found the process of printing and marketing the book quite easy, since he bought a self-publishing package that included those two options. He liked the rapport that he had established with AuthorHouse, and felt like they knew what they were doing in terms of handling the different aspects of publishing a book, especially with respect to the creative ones.

Lastly, Curtis shared some stories that have happened since Try It This Way was published, such as the time when some of his friends and acquaintances got in touch with him by way of the book. He was happy that they were able to find him, and noted that while he does not expect them to agree with everything that he wrote in the book, the fact that they read it is much appreciated.