In this post, we review Dr. Angela Lauria’s Book Journeys interview with author Denise DeSimone, author of From Stage IV to Center Stage.

As she related in her interview, Denise was diagnosed with cancer three days after participating in a ninety-mile bicycle race to raise money for children. She had originally been diagnosed with lymphoma, but the final diagnosis, chroma cell carcinoma, was worse than the original diagnosis. Doctors had predicted she would have only three months to live and would never be able to sing again, but Denise spent the next nine months on a feeding tube, after which she underwent physical rehabilitation and, nearly two years later, went on to sing the American national anthem at a Red Sox game in Fenway Park.

Denise is a life coach, and as part of her philosophy, she doesn’t believe in battles, and so inquired into her process and purpose when she had the disease. She gave her cancer a name, PIN (for “pain in the neck”) and dialogued with it, asking it some “pretty profound questions” and coming up with life lessons that she admits she couldn’t have thought of on her own. One such lesson was for her to stop beating up on herself, as, according to PIN, “The more you love yourself, the less reason there is for me to be around, and the more light you can hold in your being, the less room there’s gonna be for me.”

Denise had been blogging about her disease and her experiences with it on CarePages, after which she finally decided to write her book. Doing so wasn’t smooth sailing, as she mentioned that she experienced several “bumps in the road.” She also experienced rejection when attempting to interest publishers in her manuscript, as several of these said there were too many books on cancer already in the market, but she persisted and eventually published with Balboa Press. 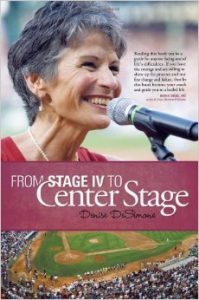 For writers who are stuck somewhere in the process of writing out their book, Denise challenges them to ask themselves if what they are doing is something that they love, and if the answer is, “Yes,” then ignore all the “little demons” that say, “you’re not enough, who do you think you are,” and so on. She also mentioned that a coach can be vital to a writer’s success because, as she says, “people can believe in our dream better than we can for ourselves.”

One of her former teachers called her book a “page-turner,” and another of her readers, a minister from Tennessee, called her book “a manual for life.”  Denise’s intention in publishing her book was to help other people, and in that regard, based on the feedback she has gotten, she has already done so.

← Can it Be Easier?The Biggest Mistake Prospective Authors Make →
Comments